Menu
Log in
Register
Install the app
You are using an out of date browser. It may not display this or other websites correctly.
You should upgrade or use an alternative browser.

2008 4.0 5r55s (bad trans), Question is: Will a 4v 4.6 and trans from Mark viii (I already have this) bolt in with appropriate hard parts such as motor mounts/crossmember/driveshaft? I'll need pcm/ecm/computer etc. from both vehicles I assume? Strong mech. skills and equip. However, I am ignorant where the comps./wiring harness is concerned. Looking for information on this as a project.

The DOHC is way too wide for a direct bolt in... lots of modifications. Now the electrical as you said would be another headache. Can it be done by the right person, where there is a will there is a way.

Well, the concept Adrenalin from way back when was supposed to do pretty much the same thing, right? SVT planned to use a 4V 4.6L from a 2003-2004 Mustang Cobra including the supercharger. However, here's a photo of the concept's engine compartment: 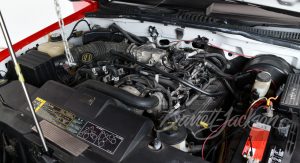 If you look closely it sure looks like a lowly 2V 4.6L. The intake even says "4.6L SOHC". I guess they didn't have to open the hood on a show truck. I suppose it's also possible that it did have a 4V in it at one time but Ford probably couldn't sell it that way when they decided to get rid of it. My guess is it never had a 4V.

BTW, that concept truck sold for $55k last year at the Barrett-Jackson Fall Auction in Scottsdale and that's where the photo came from.

Wasn't there also a shop in the Carolinas that built a Sport Trac with a GT500 5.4L with 4V heads? Not sure if they ever got it running but I believe they eventually trashed that plan and went with a 5.0L Coyote instead.

Before I got rid of mine I thought about building a 5.3L stroker out of a 4.6L and using 3V heads. Ford Performance still sells a crate 5.3L shortblock that will accept any modular cylinder heads (2V, 3V or 4V). With 3V heads it would be a direct bolt-in since it uses the 4.6L block.

I would assume one of the biggest hurdles when trying to use 4V heads would be routing the exhaust. There's only so much room between the frame rails....

I know the guy very well that purchased the truck and I thought it was about $80,000 that the truck sold for last year. Anyway it is a two valve 4.6. The truck was also butchered electronically and other mechanical items that were horrendous when he got the truck home.

Here's the auction listing with the selling price of $55k. I suppose once you add in the bidder's and buyer's fees, shipping, taxes, etc. it might get close to $80k. Did your friend buy it at the B-J auction in Scottsdale or later?

I suppose all Ford needed it to do for show duty was be able to move from a trailer to a parking spot. The auction description says "**NOT STREET LEGAL** **SOLD ON BILL OF SALE**". I assume that means it didn't have a title?